The family of NF-κB transcriptional activators controls the expression of many genes, including those involved in cell survival and development. The family consists of homo- and heterodimers constituted by combinations of five subunits. Subunit p50 includes 13 tyrosine residues, but the relationship between specific tyrosine phosphorylations and p50 function is not well understood. Subunits of p50 and p65 prepared in vitro formed a heterodimer, but this NF-κB would not bind to the interleukin-2, IL-2, promoter DNA.

Treatment of p50 with guanosine triphosphate, GTP, and a lysate from activated Jurkat cells, effected rapid p50 phosphorylation, and, in the presence of wild-type subunit p65, was accompanied on the same time scale by IL-2 promoter DNA binding. Modified p50s containing one of seven stoichiometrically phosphorylated tyrosines in NF-κB p50/p65 heterodimers, included three that facilitated binding to the IL-2 DNA promoter region to a greater extent than the wild type.

One of these three stoichiometrically phosphorylated p50/p65 heterodimers of NF-κB, containing pTyr60 in the p50 subunit, was treated with a lysate from activated Jurkat cells + GTP and shown to be phosphorylated on the same time scale as wild-type p50. This modified NF-κB also developed IL-2 promoter DNA binding activity on the same time scale as the wild type but exhibited greater binding to the IL-2 DNA promoters than the wild type.

The nature of this enhanced binding was studied in greater detail using a metabolically stable pTyr derivative at position 60 of p50 and cellular phosphatases.

Researchers in the Hecht group at Arizona State University, published in ACS Chemical Biology, suggest that enhanced DNA binding of modified NF-κB containing pTyr60 in the p50 subunit may reflect stoichiometric NF-κB phosphorylation at a site that is not normally fully phosphorylated, or not phosphorylated at all, and is relatively resistant to the effects of Jurkat cell tyrosine phosphatase activity. This conclusion was reinforced by demonstrating that modification of Tyr60 of p50 with a metabolically stable methylenephosphonate moiety further increased the stability of the formed NF-κB p50/p65 heterodimer against the action of activated Jurkat cell phosphatases. 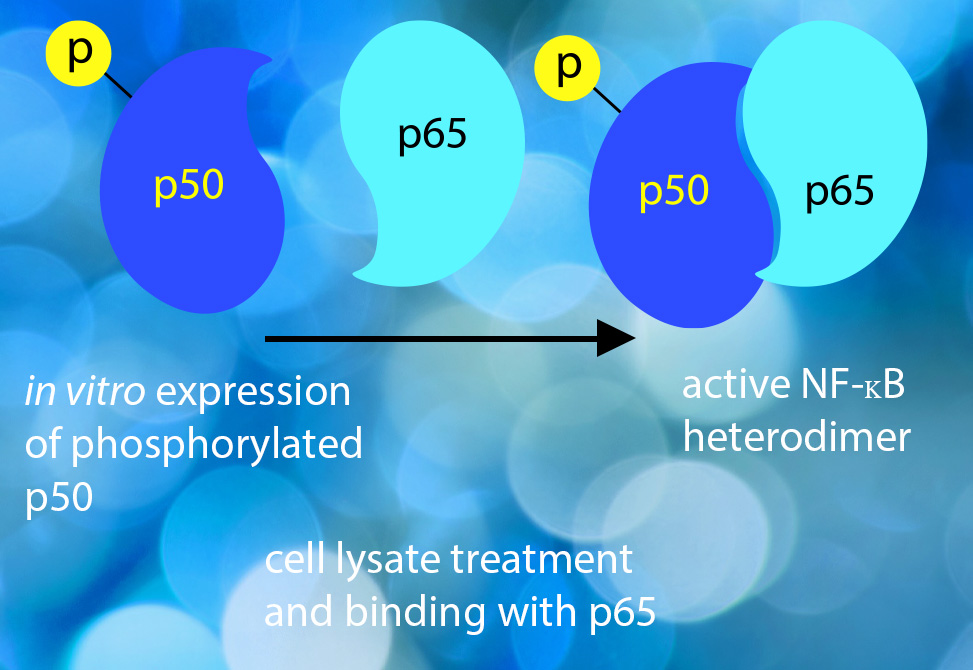