When peptides are mixed with their mirror images in an equimolar ratio, two-dimensional periodic structural folds can form, in which extended peptide strands are arrayed with alternating chirality. The resultant topography class, termed the rippled β-sheet, was introduced as a theoretical concept by Pauling and Corey in 1953.

Unlike other fundamental protein structural motifs identified around that time, including the α-helix and the pleated β-sheet, it took several decades before conclusive experimental data supporting the proposed rippled β-sheet motif were gained.

Much of the key experimental evidence was provided over the course of the past decade through the concurrent efforts of the Raskatov, Schneider, and Nilsson laboratories. Studies that focused on developing new self-assembling hydrogel materials have shown that certain amphiphilic peptides form fibrils and hydrogel networks that are more rigid and have a higher thermodynamic stability when made from racemic peptide mixtures as opposed to pure enantiomers.

Related interrogation of assemblies composed of mixtures of l- and d-amphiphilic peptides confirmed that the resulting fibrils were composed of alternating l/d peptides consistent with rippled β-sheets.

It was also demonstrated that mirror-image amyloid beta (Aβ) could act as a molecular chaperone to promote oligomer-to-fibril conversion of the natural Aβ enantiomer, which was found to reduce Aβ neurotoxicity against different neuronal cell models.

With a cross-disciplinary approach that combines experiment and theory, these three laboratories have demonstrated the unique biophysical, biochemical, and biological properties that arise upon mixing of peptide enantiomers, in consequence of rippled β-sheet formation.

In this Account, the authors give an overview of the early history of the rippled β-sheet and provide a detailed structural description/definition of this motif relative to the pleated β-sheet. They then summarize the key findings, obtained on three unique sets of aggregating mirror-image peptide pairs through independent efforts of our three laboratories, and use these results to delineate the landscape of the rippled β-sheet structural motif to inspire future studies.

Peptide sequence parameters that favor rippled β-sheet assembly are described, along with the accompanying kinetic and thermodynamic properties, as well as the resulting emergent physical properties of the assemblies.

The Account then concludes with a brief overview of some key unresolved challenges in this nascent field. There is much potential for future applications of this unique supramolecular motif in the realm of materials design and biomedical research. They hope this Account will stimulate much-needed discussion of this fascinating structural class to eventually produce a fully quantitative, rational framework for the molecular engineering of rippled β-sheets in the future. 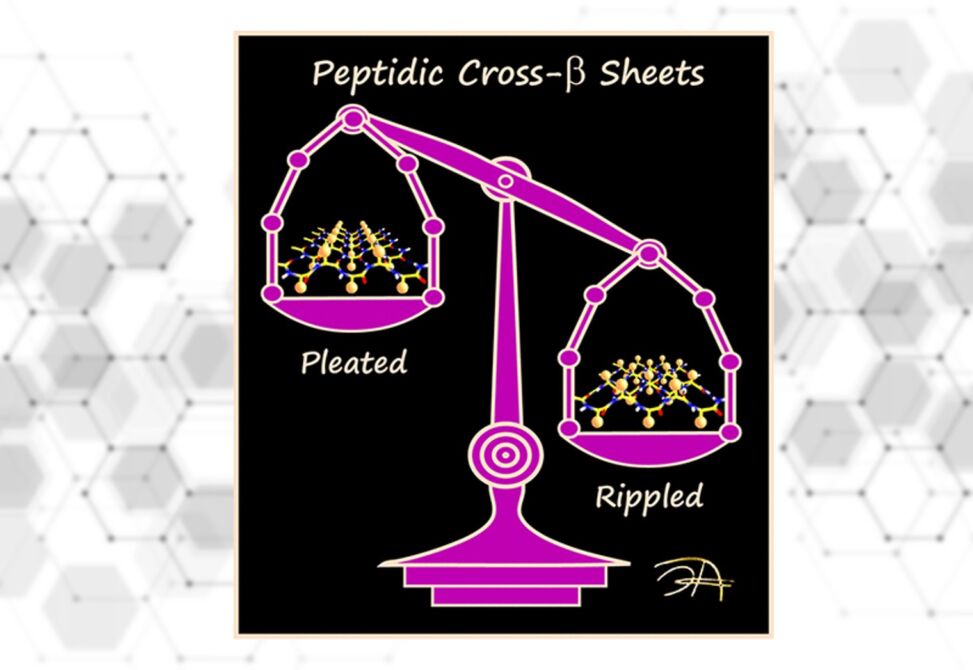