Photoremovable caging groups are useful for biological applications because the deprotection process can be initiated by illumination with light without the necessity of adding additional reagents such as acids or bases that can perturb biological activity. In solid phase peptide synthesis (SPPS), the most common photoremovable group used for thiol protection is the o-nitrobenzyl group and related analogues.

Published in Journal of Organic Chemistry, and presented in the Chemistry and Biology of Peptides Gordon Research Conference in Ventura, February of 2020, researchers in the Distefano Lab in collaboration with the Blank Lab, demonstrated that methoxy substituted nitrodibenzofuran (MeO-NDBF)-based protecting group for thiol protection has improved two photon cross section in comparison with parent nitrodibenzofuran (NDBF) analogue for SPPS.

A simple and convenient synthetic route was developed for the production of Fmoc-N-Cys(MeO-NDBF)-OH cysteine, suitable for SPPS. This analogue was efficiently incorporated into biologically relevant peptides, a-Factor and KRas, which then had their photolysis kinetics characterized in both UV- and two-photon-mediated reactions. In UV mediated deprotection a quantum yield of 0.51 was calculated for MeO-NDBF, 25-fold higher than the commercially available thiol protecting group nitroveratryl (NV). In two-photon mediated deprotection an action cross-section of 0.71–1.4 GM was particularly notable.

The biological compatibility of MeO-NDBF thiol protecting group was exhibited when UV and two-photon activation was used to initiate their subsequent enzymatic processing by the enzyme farnesyltransferase. Finally, the high temporal control afforded by MeO-NDBF was also demonstrated when increasing amount of the processed peptide was obtained in an irradiation-time dependent manner. This study exemplified the utility and applicability of MeO-NDBF as an orthogonal thiol protecting group, especially in the context of SPPS. 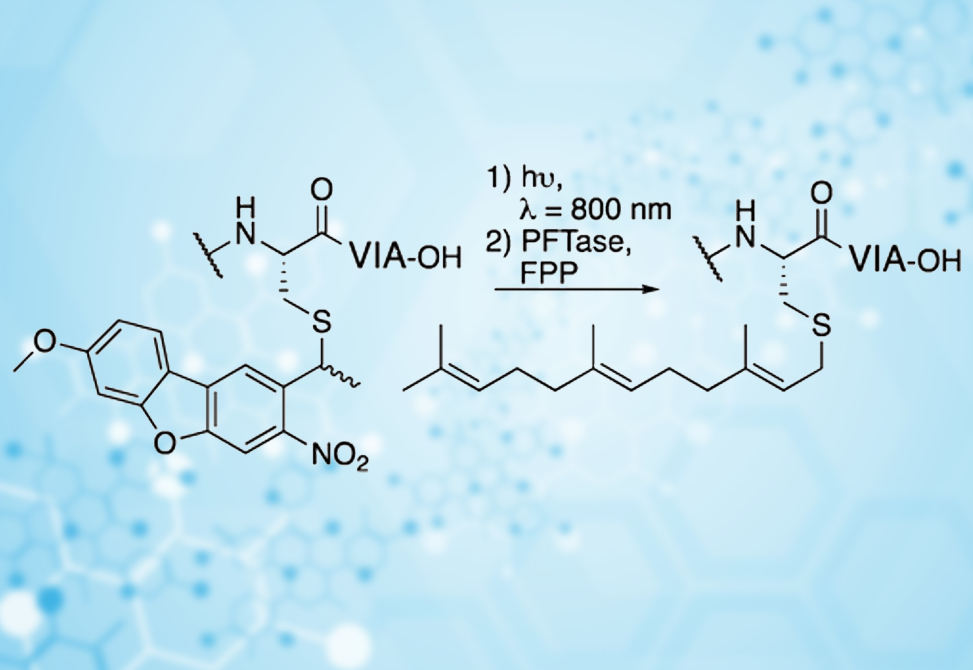