Human serum albumin, HSA, is the most abundant protein in human blood plasma. It plays a critical role in the native transportation of numerous drugs, metabolites, nutrients, and small molecules. HSA has been successfully used clinically as a noncovalent carrier for insulin, for example, Levemir, GLP-1, for example, Liraglutide, and paclitaxel, for example, Abraxane.

Site-specific bioconjugation strategies for HSA only would greatly expand its role as the biocompatible, non-toxic platform for theranostics purposes. Using the enabling one-bead one-compound, OBOC, technology, researchers in the Lam Group at UC Davis, as published in Bioconjugate Chemistry, generated combinatorial peptide libraries containing myristic acid, a well-known binder to HSA at Sudlow I and II binding pockets, and an acrylamide. They then used HSA as a probe to screen the OBOC myristylated peptide libraries for reactive affinity elements, RAEs, that can specifically and covalently ligate to the lysine residue at the proximity of these pockets.

Several RAEs have been identified and confirmed to be able to conjugate to HSA covalently. The conjugation can occur at physiological pH and proceed with a high yield within 1 h at room temperature. Tryptic peptide profiling of derivatized HSA has revealed two lysine residues, K225 and K414, as the conjugation sites, which is much more specific than the conventional lysine labeling strategy with N-hydroxysuccinimide ester.

The RAE-driven site-specific ligation to HSA was found to occur even in the presence of other prevalent blood proteins such as immunoglobulin or whole serum. Furthermore, these RAEs are orthogonal to the maleimide-based conjugation strategy for Cys34 of HSA. Together, these attributes make the RAEs the promising leads to further develop in vitro and in vivo HSA bioconjugation strategies for numerous biomedical applications. 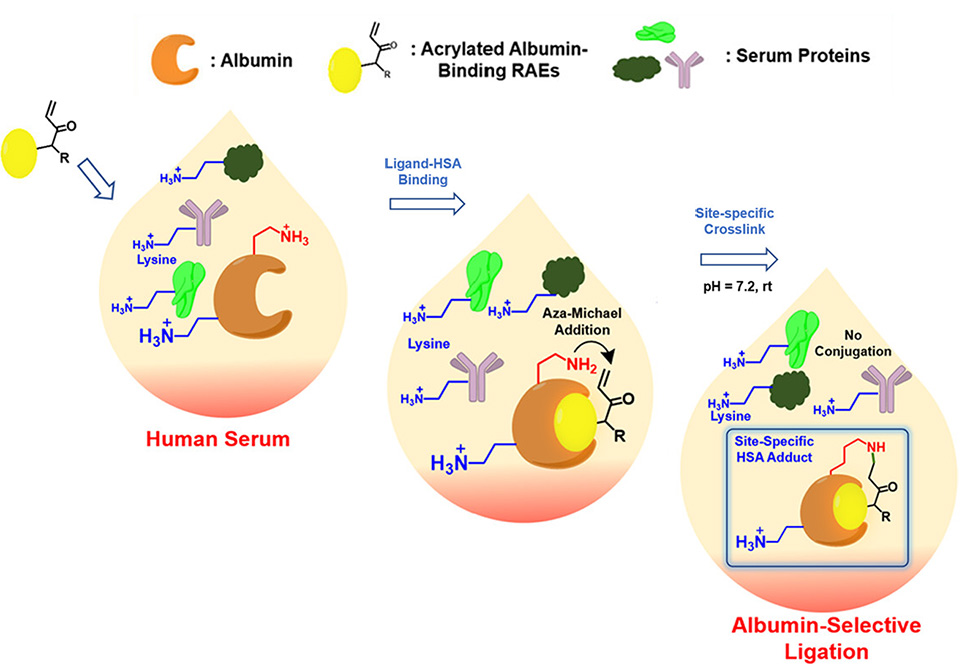