Liquid-like droplets of biomacromolecules are emerging as a fundamental mechanism of cellular signaling, but designing synthetic mimics to form such membraneless organelles remains unexplored.

Published in JACS, researchers in the Xu Group report the use of supramolecular assemblies of small peptides, as a mimic of biomacromolecular condensates, for intracellular sequestration of enzymes on endoplasmic reticulum, ER. Specifically, integrating a short peptide with naproxen, a nonsteroidal anti-inflammatory drug, NSAID, and a ligand of cyclooxygenase-2, COX-2, generates an enzymatic substrate that acts as a precursor for instructed assembly.

Slowly dephosphorylating the precursors by phosphatases forms the corresponding hydrogelators in a cellular environment, which results in the supramolecular assemblies on ER. Consisting of the precursor and the hydrogelator molecules, the assemblies enable the sequestration of COX-2 and protein-tyrosine phosphatase 1B, PTP1B, on ER. Further structure–activity investigation reveals that the colocalization of COX-2 and PTP1B relies on the NSAID motif, the phosphotyrosine, and the enzymatic dephosphorylation of the precursor.

This work, for the first time, illustrates the use of supramolecular processes for associating enzymes in cells and may provide insights for understanding intracellular liquid condensates and a new strategy for modulating protein–protein interactions. 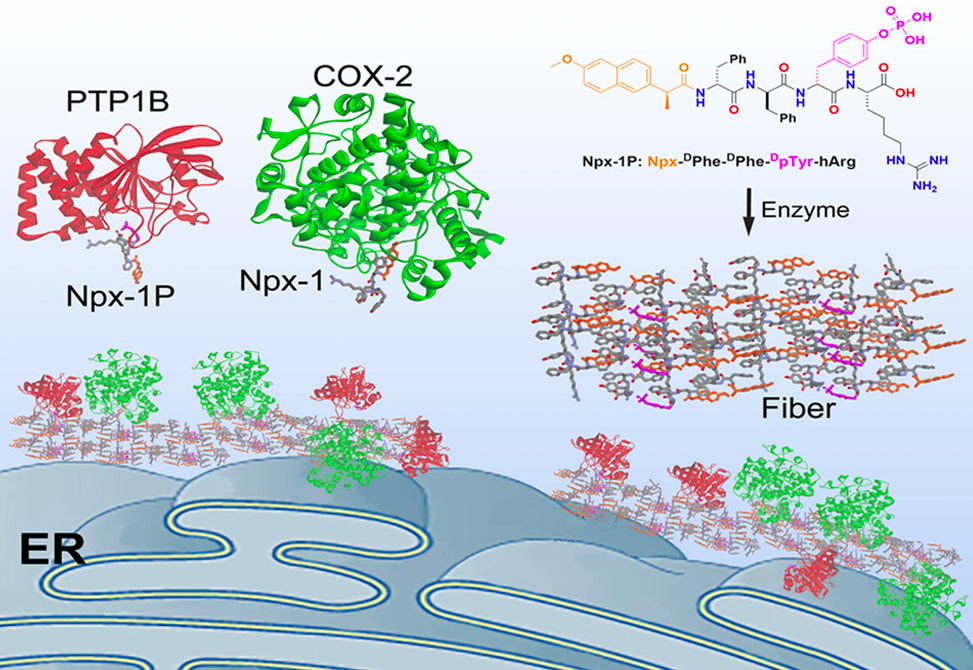