Cyclotides are a class of cyclic disulfide-rich peptides found in plants that have been adopted as a molecular scaffold for pharmaceutical applications due to their inherent stability and ability to penetrate cell membranes. One strategy to improve the production is to combine a recombinant production system with native enzyme-mediated cyclization. Asparaginyl endopeptidases (AEPs) are enzymes that can act as peptide ligases in certain plants to facilitate cyclotide maturation. One of these ligases, OaAEP1b, originates from the cyclotide-producing plant, Oldenlandia affinis, and can be produced recombinantly for use in vitro as an alternative to chemical cyclization of recombinant substrates. However, not all engineered cyclotides are compatible with AEP-mediated cyclization because new pharmaceutical epitopes often replace the most flexible region of the peptide, where the native cyclization site is located.

Dr. Craik and colleagues have redesigned a popular cyclotide grafting scaffold, MCoTI-II, to incorporate an AEP cyclization site located away from the usual grafting region. They demonstrate the incorporation of a bioactive peptide sequence in the most flexible region of MCoTI-II while maintaining AEP compatibility, where the two were previously mutually exclusive. They anticipate that our AEP-compatible scaffold, based on the most popular cyclotide for pharmaceutical applications, will be useful in designing bioactive cyclotides that are compatible with AEP-mediated cyclization and will, therefore, open up the possibility of larger-scale enzyme-mediated production of recombinant or synthetic cyclotides alike. 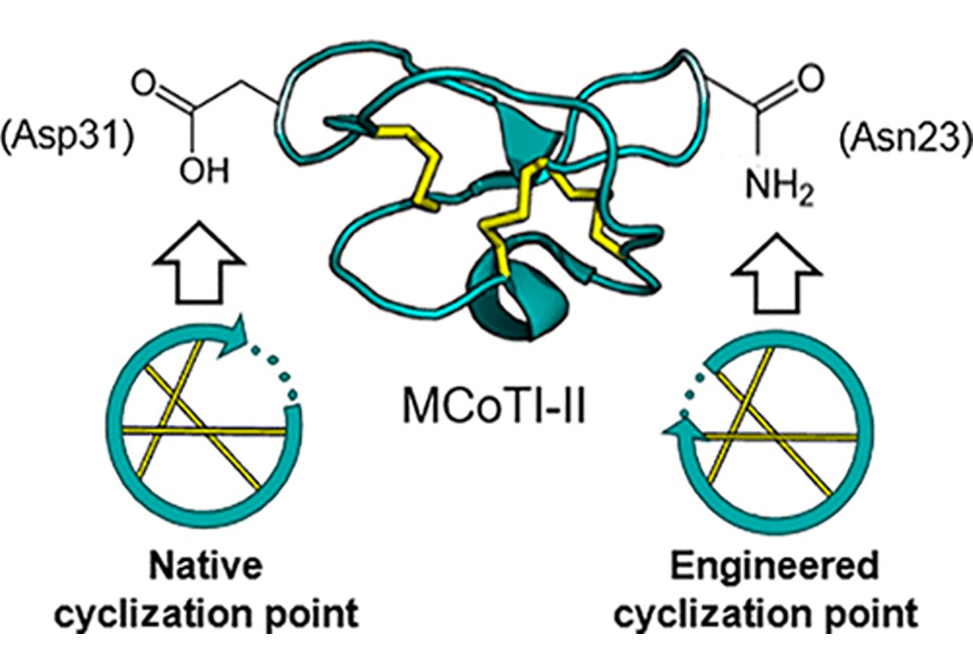