Jevgenij Raskatov was born in Moscow (where he grew up as a cellist) and following the family move to Germany in 1994, studied Chemistry at the University of Heidelberg. He then moved to Oxford to pursue his graduate studies in organic chemistry with focus on asymmetric catalysis and chiral ion pairing. This was followed by a research stay at Caltech with Peter Dervan as a Humboldt Postdoctoral Fellow.

Dr. Raskatov has started his independent research career at UC Santa Cruz in 2014. At UCSC, Dr. Raskatov decided to focus his attention on the aggregation-prone peptide and the believed culprit of Alzheimer’s Disease, Amyloid β. He used his strong background in physical organic chemistry and molecular stereochemistry, combined with his insight into bioactive peptides that he gained at Caltech, to create a paradigm-challenging molecular approach to convert toxic Aβ oligomers to non-toxic fibrils, using molecular symmetry logic.

For this pioneering work, together with his other studies that use amino acid chirality to probe Aβ structure-function relationships he was awarded the 2018 New Investigator Award of the Boulder Peptide Society. His research program employs an unusually wide set of experimental techniques, ranging from molecular modeling and NMR to neuron biology and electrophysiology. 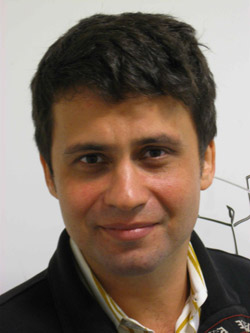